Adamantium is an nigh-indestructible metal used by many people for experiments.

Adamantium is a metallic compound developed for Weapon X after using an unknown element found in a meteorite discovered somewhere in Nigeria by William Stryker and Team X.

Stryker and the Weapon X team then proceeded to inject the adamantium into the skeleton and bone claws of Wolverine, making him nigh-indestructible. When he is later shot in the head with bullets made of the compound, he sustained severe intra-cranial trauma that induced extensive amnesia.

The Adamantium in Logan's body was actually poisoning him, this was kept in check by his healing factor. However, by 2029 Logan's healing powers were weak and thus the metal began to poison Logan's body leaving him in a state of constant pain.

Sabretooth wanted to be in the experiment that his brother was in. Stryker, however, said that he couldn't survive the procedure and rejected the deal after Sabretooth did what was asked.

Stryker later gave similar claws to Lady Deathstrike, his controlled bodyguard, extruding from the tips of her fingers. However, in a battle with Wolverine, he defeated her when he impaled her with an adamantium needle which pumped her body full of the indestructible alloy and she fell to the bottom of the Weapon X tank.

When Ichirō Yashida became ill and on the verge of death, he began stockpiling adamantium reserves at his facility in the north of Japan to construct the Silver Samurai armour as a life support system in the interim period before Wolverine was captured. He ordained the capture of Wolverine so that he could cut through Logan's adamantium claws using a heated adamantium blade and distill Logan's healing powers into his own body in order to live forever.

The katana swords that the Yashida Clan had within their possession in their household were also likely made out of adamantium, as it has been proven that regular steel cannot cut adamantium. 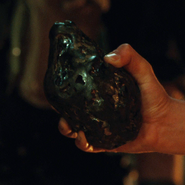 The Silver Samurai, whose exoskeleton is made entirely of adamantium.
Add a photo to this gallery

Retrieved from "https://xmenmovies.fandom.com/wiki/Adamantium?oldid=69542"
Community content is available under CC-BY-SA unless otherwise noted.