Arthur "Artie" Maddicks is a mutant and a student at the Xavier's School for Gifted Youngsters.

On an excursion at the museum, Artie was one of the students among the crowd when being taught by Storm. He saw a girl eating an ice-cream and she stuck her tongue at him. With his blue forked tongue, he stuck it out at the girl, causing her to leave in disgust. Storm catches him, calls out to Artie as he recedes his tongue, and tells him not to show his piers in public.

When Mystique hacked Styker's computer to find Magneto's file, Artie's name was part of Stryker's files, among other mutants.

When Stryker's soldiers attacked the X-Mansion, he was kidnapped by them. He was saved by the X-Men later on. 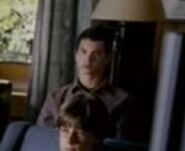 Add a photo to this gallery
Retrieved from "https://xmenmovies.fandom.com/wiki/Artie_Maddicks?oldid=99176"
Community content is available under CC-BY-SA unless otherwise noted.