War of the Sentinels

Last Stand of The X-Men

The Free Mutants were saved after the timeline has been displaced

"Whenever the Sentinels attack, Warpath spots them... then I send Bishop back to warn us of the attack before it happens. Blink scouts the exit site... and then we leave before they ever know we were there."
―Shadowcat[src]

The Battle of Moscow was a conflict that took place in 2023 of the original timeline, where the Sentinels attacked the Free Mutants resistance group while they were stationed in Moscow.

In 1973, the mutant shapeshifter known as Raven Darkholme discovered that a scientist by the name of Bolivar Trask had been experimenting on mutants for research. Trask was developing a weapons program to manufacture Sentinels, machines that could detect the X-Gene and hunt mutants down. He tried pitching his Sentinel program to the United States Congress, but was met with opposition from the Congressmen.

At the Paris Peace Accords, Trask tried to pitch the Sentinel program to Vietnamese officials, unaware of the fact that Darkholme had infiltrated the meeting disguised as a Vietnamese general. When Trask's genetic guidance system detected Darkholme's presence, she revealed her true form and battled the guards in an attempt to get to Trask. Using a gun, Darkholme killed Trask by shooting him in the head, but was tazed by Major William Stryker in the process and captured.

Darkholme's assassination of Trask convinced President Nixon that the Sentinel program was needed to protect the United States from the threat posed by mutants. At Trask Industries, Darkholme was experimented on so that the unique nature of her mutation could be used to make the Sentinels better equipped against mutants and their abilities. [1]

Since the Sentinel program went active, the world fell into ruin as both mutants and humans alike were targeted by the Sentinels, leaving the worst of humanity in charge. In the year 2023, the Sentinels located the Free Mutants in Moscow and launched an attack on the group's underground hideout, but their arrival was detected by Warpath through his heightened senses. After he and Blink warned their teammates of the coming attack, the Free Mutants engaged in battle with the Sentinels to allow Kitty Pryde and Bishop to escape to the safety of a vault. There, Pryde used her powers to send Bishop's consciousness back in time to warn them of the attack. As she was in the midst of doing so, the Sentinels brutally slaughtered the Free Mutants one by one. Fortunately, after Pryde broke Bishop's connection to the past, the changes he made took hold and caused the Sentinels' attack to never have happened at all, saving the lives of the Free Mutants and allowing them to recoup in China.

Warpath and Blink working together to attack a Sentinel

A Sentinel adapting to Colossus' power

Sunspot blasting a Sentinel with fire 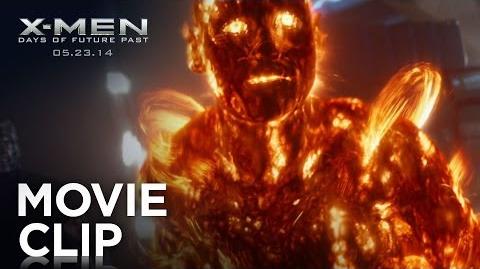 Retrieved from "https://xmenmovies.fandom.com/wiki/Battle_of_Moscow?oldid=93048"
Community content is available under CC-BY-SA unless otherwise noted.