During one of his business ordeals, Caliban helped Mystique locate Nightcrawler. After the mutant later returns, Caliban advises her to take Nightcrawler to Xavier's school before cryptically informing her of Erik's return.

Later, Caliban is approached by Apocalypse and Storm. Caliban, however, does not identify En Sabah Nur, and stated he doesn't know who he is. When the mutant broker asks if he has any money, En Sabah Nur says he doesn't have any currency, and demands him for help. Caliban then pulls a gun on Apocalypse, but he disinigrates it. Psylocke then protects Caliban from him. Apocalypse then recruits his assistant, Psylocke, as the second member of his Four Horsemen.

Caliban is shown to be extremely greedy and only interested in money, as shown when he pulled a gun on En Sabah Nur when he sayed that he didn't have any money. 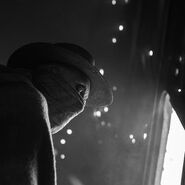 Retrieved from "https://xmenmovies.fandom.com/wiki/Caliban?oldid=65835"
Community content is available under CC-BY-SA unless otherwise noted.