Daniels is a mutant who fought in the Vietnam War.

In 1973, Daniels is first shown as a mutant soldier in Saigon part of a military team along with Toad, Ink and Havok about to be appropriated by William Stryker on behalf of Trask Industries' mutant research program. During Mystique's fight to rescue them, Daniels used his mutant powers to put some of the soldiers to sleep. He leaves Vietnam with the others soon afterwards, returning to the United States. 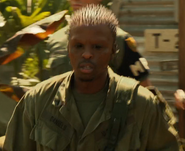 Retrieved from "https://xmenmovies.fandom.com/wiki/Daniels?oldid=100611"
Community content is available under CC-BY-SA unless otherwise noted.