Delilah is a mutant, artificially created by Alkali-Transigen to use as a soldier. She has the mutant ability to freeze anything with her breath.

Delilah was created along with April, Bobby, Charlotte, Erica, Gideon, Jackson, Jamaica, Joey, Jonah, Julie, Laura, Mira, Rebecca, Rictor, Stephen, Tamara, and Tomás by Zander Rice as part of the Transigen Project. Rice used genetic samples from mutants to create new embryos that were carried by captured women. At one point, the nurses and the X-23 children celebrated Delilah's birthday. After they sang happy birthday to Delilah in spanish, Donald Pierce arrived in the room, put out the candles on Delilah's birthday cake, and expressed disgust that they were celebrating an occasion by saying "A cake, really?".

The mutant children were supposed to become soldiers, but were deemed failures after the creation of X-24. After the X-24 project was a success, and the X-23 Project a failure, Transigen scheduled all the other subjects for termination. With the help of the nurses, who had grown attached to the children, the mutant children escaped to find Eden, a safe haven for mutants in North Dakota, while Laura was spirited away and adopted by her nurse, Gabriela Lopez.

When Laura made it to Eden, with her biological father, Logan, Delilah helped nurse him back to health. Later that night Gideon prepares a serum for Logan and asks Rictor if the dosage is good, but Rictor says that the dosage is too much, and tells Gideon to reduce it. Delilah prepares a wet towel for Logan and uses her Ice Breath on it to make it cooler. As she puts it up to Logan's face, he unexpectedly grabs her arm before letting go, causing a startled Delilah to back away.

2 days later, while Logan was asleep, Bobby, Stephen, Charlotte, and Gideon, use pairs of scissors to trim off most of Logan's beard. When he awakens, he sees the mutant children present giggling, feels his beard, goes to a mirror, and sees that some of the children trimmed it off, and tells them that it's not funny. Logan notices Rictor walking up the stairs, and asks how long he's been out, as the 2 mutants exit the room.

The next day, Delilah and the other mutant kids begin their hike through the woods to cross the boarder into Canada where they would be safe. However, they were being pressured by Alkali-Transigen's security the Reavers, led by Donald Pierce. When Delilah was confronted by one of the reavers, she used her ice breath to freeze his cybernetic arm then destroyed it but she was captured by another reaver. Then the other kids, excluding Laura, were captured and brought to Rice.

However, Logan shows up to save her and the others. Logan kills Rice, and the kids kill the reavers except, Pierce, who unleashed Logan's imperfect clone X-24. As Logan and Laura fight X-24, Joey subdues Pierce to keep him from helping X-24, then Delilah combines her powers with Bobby and Charlotte and they kill Pierce. However, X-24 manages to crucially wound Logan, before Laura kills X-24 using an adamantium bullet Logan kept. After Delilah sadly watches as Logan dies in Laura's arms, she and the other kids hold a funeral for Laura's father, then Delilah and the mutants continue with the hike and cross the boarder. 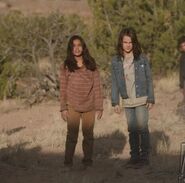 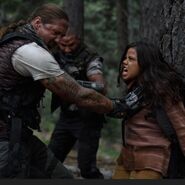 Retrieved from "https://xmenmovies.fandom.com/wiki/Delilah?oldid=103008"
Community content is available under CC-BY-SA unless otherwise noted.