For a variety of reasons, scenes are deleted the movies. Whatever that reason, the scene was good enough to advance from the writers to the actors to the cameras. At many times, these scenes give a more detailed exposition of a plot point, or just give the fanatic an "Easter egg" to be enjoyed. Since they provide additional plot points or exposition, deleted scenes are considered canon, unless they are contradicted in the published scenes of a movie or episode. The following is a list of the deleted scenes from various movies and television series in the X-Men films:

Scott says that Logan should be taking this more seriously, their are dangerous mutants out there.

Jean and Charles talk about wolverine.

Charles warns Jean it might not be safe poking around in Logan's mind.
Add a photo to this gallery

Rogue saves two students
Add a photo to this gallery

Bobby convinces Wolverine that he, colossus and kitty are ready.

Extended scene between magneto and wolverine.

After Cyclops misses the session in the danger room, wolverine goes looking for him. He climbs the side of the mansion to peer into Scott's room. Scott is in bed with a random woman, he awakes to find Wolverine at the window and fires a blast knocking Logan far into the field. Wolverine finds Hank McCoy standing in his way, stating that he has an appointment with the Professor. Wolverine tries to go back to the mansion to fight Cyclops but he ends up getting beaten up by beast.

Alternate Danger Room scene featuring Kitty and Bobby being hunted by sentinels and mutant killers, they are found and killed but the simulation reverts to normal. Wolverine, Hank, Storm and Profesor X. are watching the simulation, Rogue appears and Wolverine asks where she's been, since she was supposed to be part of the simulation. 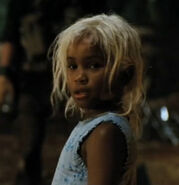 Gwen is waiting in Wolverines car.

Bobby's death in the Rogue Cut

Charles says Scott reminds him of a young Alex.
Add a photo to this gallery

Retrieved from "https://xmenmovies.fandom.com/wiki/List_of_deleted_scenes?oldid=65867"
Community content is available under CC-BY-SA unless otherwise noted.