In March 2014, James Mangold announced that shooting for the The Wolverine sequel will begin after the release of Bryan Singer's, "X-Men: Apocalypse" in 2016. Box Office tweeted that the film will be released on March 3rd, 2017.[1] On March 21, 2014, David James Kelly is announce to write the film's script and Jackman had confirmed to once again reprise his role as Wolverine.[2]

This will be the last time Hugh Jackman portrays Wolverine in a solo role. [3] On August 13th Patrick Stewart confirmed his involvement in the film as Professor X.[4]

In February 2016 a leaked image suggested that Fox may consider going for an R rating.[5]

Production for the film will begin on April 25th 2016 with shooting locations in New Orleans and New Mexico. 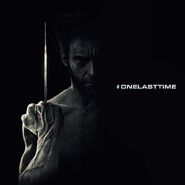 Leaked image of the poster
Add a photo to this gallery

Retrieved from "https://xmenmovies.fandom.com/wiki/Logan_(film)?oldid=57725"
Community content is available under CC-BY-SA unless otherwise noted.