Start a Wiki
watch 01:47
'Logan' Teaser Trailer
Do you like this video?

"Logan. This is what life looks like. A home. People who love each other. You still have time."
― Charles Xavier[src]

Logan (previously referred to as Wolverine 3) is the third and final Wolverine film. The film was negotiated by Twentieth-Century Fox for James Mangold to return to direct a sequel to The Wolverine with Hugh Jackman to reprise his role as Wolverine since the aforementioned film was critically and financially successful. The movie is also to be Jackman's last portrayal of Wolverine as well as Patrick Stewart's last portrayal of Professor X.

In 2029[1], the Mutant population has shrunk significantly and the X-Men have disbanded. No new mutants have been born in over twenty years, and as their numbers dwindled, Professor X's dreams of a new stage in evolution slowly died.

A weary Logan has surrendered himself to alcoholism, now earns a living as a limo-driving chauffeur in a town on the Mexican border, and is hustling for medication that he takes out south to a remote, makeshift home and hideout, he shares with Caliban, nursemaid to the ailing and infirm, old Professor X, whom he and Caliban take care of and keep hidden away. In addition, Logan's power to self-heal is dwindling; fading as he has aged, with his face and body being scarred from past injuries and battles.

One day, Logan's attempts to hide from the world and his legacy are ended when a female stranger asks him to drive a girl named Laura to the Canadian border. At first, Logan refuses, but the Professor reveals that he has been waiting a long time for her to appear. Laura possesses an extraordinary fighting prowess and is in many ways like Wolverine. She is pursued by dark forces[2] and sinister figures working for a powerful corporation because her DNA contains the secret that connects her to Logan. A relentless pursuit begins, and a decrepit Wolverine is forced to ask himself if he can or even wants to put his remaining powers to good use, as he he is drawn back into action, despite his hopelessness.[3]

The year is 2029. Logan, who has aged greatly when his healing factor began to falter over the years, spends his days working as a chauffeur and hustling for prescription drugs in Texas while he and Caliban live in an abandoned farm across the border in Mexico, where they care for a senile Charles Xavier, who had inadvertently killed several of his X-Men in a seizure-induced psychic attack a year earlier. Logan is approached by Gabriela, a nurse for Transigen who asks to escort her and an 11-year-old girl named Laura to a place in North Dakota called "Eden". After reluctantly accepting the job, Logan discovers that Gabriela has been murdered and he, Xavier, and Laura narrowly escape from Donald Pierce and the Reavers while Caliban is captured and ordered to use his mutant powers to track them. Logan and Xavier learn through a video on Gabriela's phone that Transigen was breeding children with DNA samples from several mutants, but upon completion of the "X-24" project, the children were to be put to death. Gabriela helped several children escape from the Transigen compound before smuggling Laura across the border. Furhermore, Laura is revealed to be Logan's "daughter", as she was bred with his DNA.

While staying in Oklahoma City, Logan develops skepticism over the location of Eden, as he discovers it being referenced in an X-Men comic book that Laura brought with her. The Reavers find their whereabouts, but Xavier suffers another seizure and freezes everyone at the hotel with a psychic blast. Logan injects Xavier with a suppressant before they leave the city. The trio are given shelter by a family after helping them round up their horses during a highway incident. That night, Xavier and the family are killed by X-24, a perfect clone of Logan, who then shackles Laura and heads to the Reavers' van. Caliban grabs two grenades and sets them off, killing himself and destroying the van while Logan and Laura once again escape. After burying Xavier, Logan reluctantly follows Laura's orders to take her to Eden. They arrive at Eden, which is a safe haven run by Rictor and former Transigen test subjects. There, Logan learns that the children will make an eight mile journey across the forest to the Canadian border, but they are quickly captured by the Reavers. Using a mutant serum given to him by Rictor, a re-energized Logan plows through the Reavers, but the serum wears off quickly before he meets Zander Rice, the head of the Transigen project who sought to avenge his father's death during the Weapon X program. Logan kills Rice while the children overwhelm Pierce with their powers, but he is outmatched by X-24. He is impaled through a tree during the fight, but Laura shoots X-24 in the head with an Adamantium bullet, which Logan had kept with him for years. After Logan succumbs to his wounds, Laura and the children bury him before continuing their journey across the border. As they all leave, Laura returns to Logan's grave, removes the cross, and places it on its side to create an X, honoring Logan as the last of the X-Men.

In November 2013, it was reported that 20th Century Fox had begun negotiations with both actor Hugh Jackman and director James Mangold to return for a third solo film starring Wolverine.[4] Mangold is negotiating now to write the treatment for the film with Lauren Shuler Donner returning to produce.[5] Hugh Jackman is set to reprise his role as Wolverine. David James Kelly was hired to write the script for the film.[6]

In March 2014, James Mangold announced that shooting for the The Wolverine sequel will be inspired by other Wolverine stories from the comic books and will begin after the release of Bryan Singer's, X-Men: Apocalypse in 2016. Box Office tweeted that the film will be released on March 3, 2017.[7][8][9][10][11] On March 21, 2014, David James Kelly is announced to write the film's script and Jackman had confirmed to once again reprise his role as Wolverine.[6]

It was also announced that this film will be the last time Hugh Jackman portrays Wolverine in a solo role, and as a leading character.[12][13][14][15][4]

In February 2015 and Patrick Stewart confirmed his involvement in the film as Professor X, while stating that he will not be featured in X-Men: Apocalypse.[16][17]

In March 2015, Mangold anticipated filming would start "early next year."[18]

In August 2015, Stewart revealed that he would have a significant role in the film.[19]

In September 2015, Liev Schreiber, who portrayed Sabretooth in X-Men Origins: Wolverine, appeared on The Tonight Show with Jimmy Fallon and discussed the possibility of reprising his role as Sabretooth in the film, though stated he had yet to be contacted by the production.[20]

In January 2016, Jackman confirmed that a screenplay was close to completion, but did not know when filming will begin.[21]

In February 2016 a leaked image suggested that Fox may consider going for an R rating.[22] Simon Kinberg revealed to Collider that filming as already started and it will be an R rated film.[23] During the same month, Liev Schreiber said that he was in talks to reprise his role in the sequel. Schreiber reiterated interest in being the film, to MTV News at the 2016 Oscars Red Carpet, and confirmed that he had been in talks to reprise the role of Sabretooth in some capacity.[24][25][26][27][28] [29][30]

By April 2016, Boyd Holbrook was cast in the film to play an unnamed relentless and intense head of security for the Essex Corporation,[31] while Richard E. Grant was revealed to have been cast as an as-of-yet unnamed mad scientist.[32] In the same month, Simon Kinberg stated that the film would be set in the future.[33] Towards the end of the month, Stephen Merchant was cast in an unspecified role.[34] Production for the film will begin on April 25, 2016 with shooting locations in New Orleans and New Mexico.[35]

In May 2016, Eriq La Salle and Elise Neal were cast in unspecified roles.[36][37] On May 9, 2016, Kinberg said filming had begun. Kinberg says the film "takes place in the future, and as you and others have reported, it is an R-rated movie. It’s violent, it’s kind of like a western its tone. It’s just a very cool, different film."[23] Also in May, Elizabeth Rodriguez was in negotiations to join the cast.[38]

On July 25, 2016, it was reported that filming had begun in the Northern Meadows neighborhood of Rio Rancho, while a few miles further down King Boulevard there is an elaborate set built with a toppled water tower, that will be used for exterior shots until June 27, 2016.

On August 11, 2016, it was reported that the production of Juarez were in the process of seeking worn out cars to work on an upcoming scene filmed on August 12, 2016 in Albuquerque, New Mexico. In Late August 2016, filming for Wolverine 3 wrapped.[39][40]

In January 2017, James Mangold revealed that Nathaniel Essex/Mister Sinister won't be appearing in Logan, despite Bryan Singer's previous claims that the villain would be making an appearance in the film.[44] 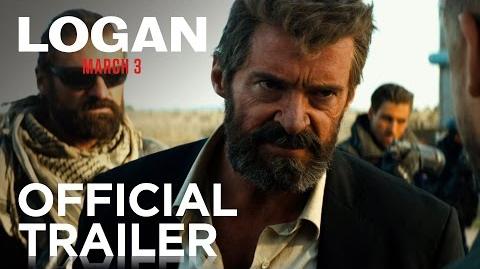 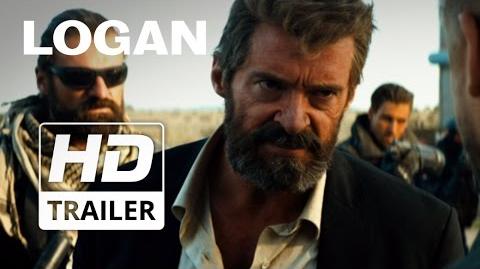 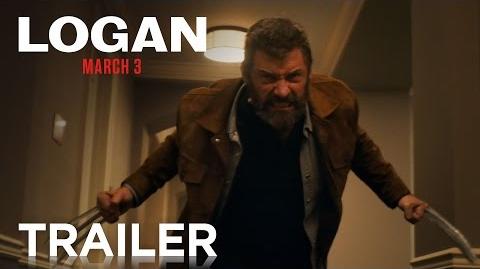 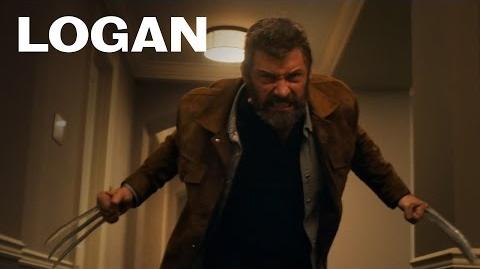 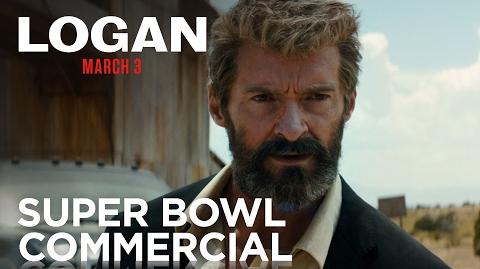 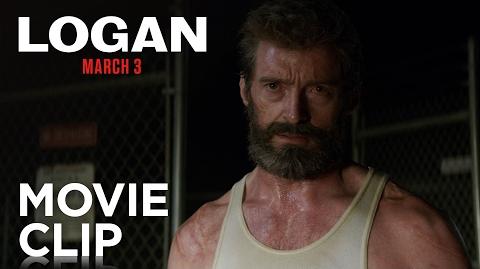 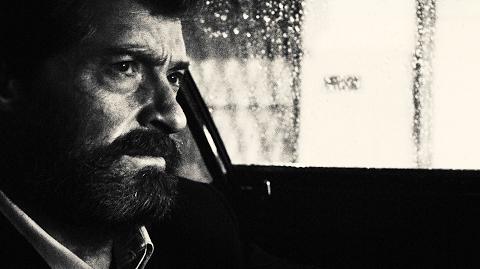 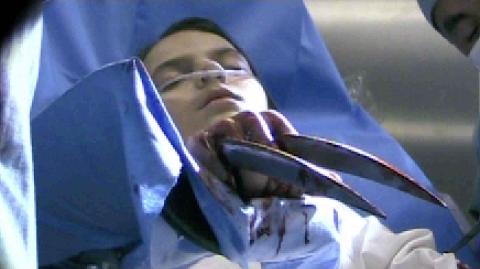 Laura.mov
Add a photo to this gallery

Logan is thematically based on the Old Man Logan storyline written by Mark Millar. In a post-apocalyptic future, a broken and pacifistic Logan lives with his family on a farm in California. The superheroes of the world are dead, killed when the supervillains united as a cohesive force. America is under their rule, divided into territories. Logan lives under Bruce Banner, the Incredible Hulk, and his in-bred family of Hulks. When Logan cannot pay his rent, his family are threatened. Needing money quickly, he accepts a job from the now blind Clint Barton to travel cross country to deliver a package. The film is not a direct adaptation, as many of the comic characters are not available for use in the X-Men films due to rights issues.

Retrieved from "https://xmenmovies.fandom.com/wiki/Logan_(film)?oldid=69711"
Community content is available under CC-BY-SA unless otherwise noted.