Mutates are individuals that had their recessive X-Gene activated through external means or had been exposed to an external stimuli, thus unlocking superhuman abilities similar to that of mutants.

As a major proponent of the Mutant Registration Act, Senator Robert Kelly is kidnapped by the Brotherhood of Mutants and brought to the island of Genosha. There, Magneto uses a machine to expose Senator Kelly to radiation, thus triggering a mutation. Using his newfound abilities, Senator Kelly escapes Genosha and arrives at the X-Mansion, seeking help from Dr. Jean Grey.

From reading Senator Kelly's mind, Professor X learns that Magneto intends to use his machine to transform all the world leaders present at the World Summit into mutates, so that they would share the persecution that mutants face in society. However, because of the unstable nature of these mutations, anyone exposed to the machine's radiation will be harmed. This is proven when Senator Kelly dies shortly afterwards, his body disintegrating into a liquid state.

The X-Men head to Liberty Island, where Magneto is holding Rogue after kidnapping her. Through her ability to absorb mutant powers, Rogue unwillingly receives Magneto's powers and powers the machine. As the radiation is about to reach the World Summit, however, Wolverine manages to destroy the machine with help from the X-Men, saving the lives of the world leaders.

After being diagnosed with terminal cancer, Wade Wilson is recruited by Agent Smith to take part in an experimental program that would cure him of his cancer and make him superhuman. After agreeing to join the program, Wade learns that it is in fact a covert organisation creating super soldiers and selling them off to the highest bidder. After he is subjected to extreme physical torture, Wade's mutant genes are unlocked and alters his outward appearance grotesquely. He manages to escape captivity and sets the workshop ablaze, thus temporarily halting the program's production of mutates.

With enhanced healing abilities, Wade dons a costume and becomes a mercenary known as "Deadpool". He hunts down associates of Ajax, the man responsible for operating the program that triggered his mutation. Through Agent Smith, Deadpool learns of Ajax's whereabouts and slaughters many of his associates to get to him. Unfortunately, the intervention of Colossus and Negasonic Teenage Warhead prevents him from killing Ajax.

After recuperating, Ajax and his partner - Angel Dust - kidnap Deadpool's former lover, Vanessa, in an attempt to lure him out. Enlisting the help of Colossus and Negasonic Teenage Warhead, Deadpool battles Ajax's forces to rescue Vanessa. The fight ends with Deadpool shooting Ajax in the head after Negasonic Teenage Warhead's powers reduces the aircraft they fought on to rubble. With Ajax's death, the mutate creation program is seemingly disbanded. 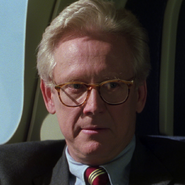 Senator Robert Kelly
Add a photo to this gallery 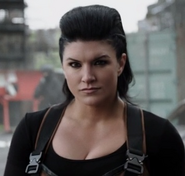 Wade Wilson/Deadpool
Add a photo to this gallery

Retrieved from "https://xmenmovies.fandom.com/wiki/Mutate?oldid=100964"
Community content is available under CC-BY-SA unless otherwise noted.