Nightcrawler was controled by Colonel William Stryker to kill the President. Nightcrawler failed but was close when holding a knife in the air ready to kill. He was shot in the nick and teleported away letting the knife drop. It missed the President and fell right beside him. On the knife it said "MUTANT FREEDOM NOW."

Nightcrawler told Professor X and Beast that he is a simple man an does not want to fight. He left to Germany but was told that he was aloud to come back. Nightcrawler thanked him and went off to take a break. 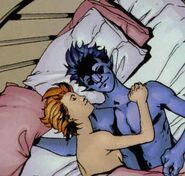 Retrieved from "https://xmenmovies.fandom.com/wiki/Nightcrawler?oldid=6891"
Community content is available under CC-BY-SA unless otherwise noted.