Russia is a country situated in northern Eurasia. At 6,592,800 square miles, Russia is the largest country in the world, covering more than one-eighth of the Earth's inhabited land area. Russia is also the world's ninth most populous nation with over 143 million people.

In 1962, General Armivolkoff meets with Hellfire Club member Emma Frost at his military retreat. Although Sebastian Shaw was originally supposed to meet with him, he decides to deal with the growing threat from Division X in the United States and sends Frost in his place.

While there, Frost attempts to convince Armivolkoff that with the U.S. placing their missiles in Turkey, Russia might need to respond. When he initially refuses to discuss the matter, she attempts to seduce him using her telepathy. However, Charles Xavier and Erik Lehnsherr - both of whom had accompanied a CIA covert ops-team to apprehend Shaw - break into his retreat and ultimately into his room, discovering both the general and Frost. With Frost's illusion broken, the general attempts to shoot both men before Xavier telepathically knocks him out.

Later on in Moscow, Shaw finally meets up with Armivolkoff and advocates to the latter for the need to place missiles in Cuba to counteract America's placement of its missiles in Turkey (which Shaw engineered). Armivolkoff responds that such an action would provoke a nuclear war with America - something that Shaw secretly hopes for in order to wipe out non-mutant humans. Before he can contact the KGB to apprehend Shaw, the Hellfire Club appears and ultimately coerces him to place Russian missiles in Cuba.

Armivolkoff is later seen advocating to Nikita Khrushchev for the placement of missiles in Cuba, and orders a fleet to protect any Russian cargo ships carrying missiles bound for Cuba.

By the year 2023, the Sentinels had taken over Moscow, and most likely all of Russia.

During their travels to escape the Sentinels, Bishop, Colossus, Blink, Warpath, Iceman, Kitty Pryde and Sunspot rested in a bunker under the city for an unknown period of time. Eventually they were discovered and 3 Sentinels were sent to kill them. Warpath, however, detected them and he and Blink alerted the others. After Kitty and Bishop left, the others prepared for battle.

The Sentinels drilled their way in and attacked. They fought bravely to buy Kitty and Bishop time but were all eventually killed. When they discovered Kitty, the Sentinels were about to blast her but Bishop had changed the past and the group left before the Sentinels could discover them. 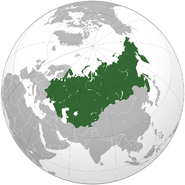 Map of the USSR

Flag of the USSR 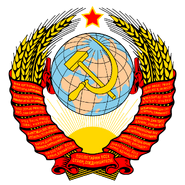 Retrieved from "https://xmenmovies.fandom.com/wiki/Russia?oldid=99600"
Community content is available under CC-BY-SA unless otherwise noted.