"These troops are going home.”
“Well, Colonel, I don't believe you have jurisdiction in this matter.”
“I'm afraid I do, son."
―Colonel and William Stryker[src]

Saigon Rescue Mission was an event that occurred in 1973 of both the original and revised timelines. It saw the mutant shapeshifter known as Mystique infiltrate a U.S. military base in Saigon, Vietnam to rescue mutant soldiers that were about to be transported to Trask Industries for experimentation.

In 1962, following the end of the Cuban Missile Crisis, Erik Lehnsherr formed the Brotherhood of Mutants after U.S. and Soviet ships unsuccesfully fired nuclear missiles at him and his mutant allies.[1] However, the group disbanded after Lehnsherr was implicated in the assassination of United States president, John F. Kennedy, in 1963.[2] In July of that year, Brotherhood members Azazel and Angel Salvadore were killed by Project WideAwake operatives.

By 1973, Raven Darkholme was the sole remaining member of the Brotherhood not to have been killed or incarcerated. Disguised as a man named Colonel Sanders, Darkholme infiltrated a U.S. military base stationed in Saigon, Vietnam. There, she discovered that the mutant soldiers present were being shipped off to Trask Industries with their lab results. Her old friend and ex-teammate Havok was one of the soldiers, along with Daniels, Toad and Ink. The arrival of Major William Stryker prompted Darkholme to reveal her true form and engage in battle with the human soldiers.

After the mutant soldiers used their abilities to take out the remaining humans, Darkholme - disguised as Colonel Sanders again - helped them board a plane heading to the United States.[3] 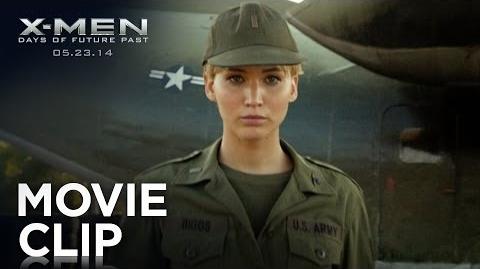 Retrieved from "https://xmenmovies.fandom.com/wiki/Saigon_Rescue_Mission?oldid=89734"
Community content is available under CC-BY-SA unless otherwise noted.