Start a Wiki
watch 01:59
What is The New Mutants?
Do you like this video?

"Did you know that baby rattlesnakes are more dangerous than adult ones? They haven't learned to control how much venom is secreted. All of you are dangerous. That's why you're here."
―Dr. Cecilia Reyes[src]

The New Mutants is an upcoming superhero-horror film. It is slated to be released on April 3, 2020, and will be the thirteenth and final installment in the X-Men film series.

Due to the acquisition of 21st Century Fox by The Walt Disney Company, The New Mutants will be distributed by Walt Disney Studios Motion Pictures.[2] This will also mark the final film in Fox's X-Men franchise.

20th Century Fox in association with Marvel Entertainment presents The New Mutants, an original horror thriller set in an isolated hospital where a group of young mutants is being held for psychiatric monitoring. When strange occurrences begin to take place, both their new mutant abilities and their friendships will be tested as they battle to try and make it out alive.[3]

At a Fox Blu-Ray press event in Beverly Hills in September 2009, Lauren Shuler Donner confirmed that there are plans for a film involving the New Mutants. However, she stressed that it has yet to be pitched to the studio.

In May 2015, Deadline reports that Josh Boone was hired to direct and co-write, alongside Knate Gwaltney, a film adaptation of The New Mutants comic-book series.[11] Acting as a spin-off to the X-Men film series, the film will be written by Boone and Gwaltney, while Donner and Kinberg are attached to produce.[12]

In August 2015, Boone shared an image of the script which he was writing along with Gwaltney and was "not done yet."[13]

In May 2016, Kinberg confirmed that the script included Professor X, and stated his hope for filming to start at the beginning of 2017.[16]

3 months later, in August 2016, Scott Neustadter and Michael H. Weber, who had worked with Boone writing The Fault in Our Stars, were also working on the script for The New Mutants. The title team's roster had also expanded to include the character Warlock. Boone explained that he brought Neustadter and Weber onto the film to write a new draft of their script while he and Lee were busy on another project.[17][18] During the same month, it was reported that Scott Neustadter and Michael H. Weber would write the script with the films line up to include Danielle Moonstar, Wolfsbane, Sunspot, Cannonball, Magik, and Warlock.[19]

In November 2016, Coming Soon.net reports that Demon Bear would be the main antagonist in the film, the site also reveal that 20th Century Fox is currently targeting a Spring 2018 release date, the film's tone is describing as a "Stephen King meets John Hughes-style horror movie" and that Nat Wolff is being eyed for the role of Cannonball.[20] Boone announced, on his Instagram page, that Pre-Production has began.[21][22]

The film had entered pre-production in Boston, Massachusetts by April 2017, in preparation for filming to begin in that city. Location scouting had been taking place, including at Medfield State Hospital, which was previously used as a filming location for Shutter Island.[23] Fox scheduled The New Mutants for an April 13, 2018 release. Several weeks later, the studio officially announced the casting of Taylor-Joy and Williams, and was "making serious efforts to find ethnically appropriate actors" for the cast, widely searching for a South American to play Sunspot and a Native American to play Moonstar. By then, Kinberg was producing the film with Karen Rosenfelt; McAvoy was no longer slated to appear in the film; and Wolff was no longer in the running to portray Cannonball.[24][25]

In May 2017, it was reported that James McAvoy would not be reprising his role Professor X for the film. Even though his three-picture deal with 20th Century Fox was completed with the release of X-Men: Apocalypse, it has been expected that the studio will re-sign McAvoy so that he continue to portray Charles Xavier/Professor X -- one of the world's most powerful mutant telepaths -- in New Mutants and Dark Phoenix.[26][27] At the end of the month, Henry Zaga was expected to be cast as Sunspot, and Rosario Dawson — who also portrays the Marvel character Claire Temple across the various Marvel Netflix television series — was in talks to join the film as Cecilia Reyes, a mentor to the title group.[28]Rosario Dawson in Talks to Star in X-Men Spinoff 'New Mutants'</ref>[29]

It was explained that McAvoy was no longer involved due to Professor X being written out of the script with further drafts, and Alexandra Shipp's Storm had likewise been written out of the film. Additionally, Boone confirmed that the film would be "a full-fledged horror movie set within the X-Men universe. There are no costumes. There are no supervillains. We’re trying to do something very, very different". He was particularly influenced by Bill Sienkiewicz' time as artist on the New Mutants comic, which he called, "a darker and more surreal and impressionistic X-Men series than we’d ever seen before".[28] Boone had previously stated that he does not like horror films, except for "classic ones" such as The Exorcist, Rosemary's Baby, and The Shining, but was looking to "pioneer and champion doing prestige versions of horror films" based on his love for horror novels such as King's works. At the end of the month, Charlie Heaton was in talks to portray Cannonball.[30]

At the start of June 2017, Zaga, Dawson, and Heaton were confirmed to have been cast, and newcomer Blu Hunt was cast as Danielle Moonstar after an extensive and challenging international search that prioritized "ethnic authenticity".[31][32] The character was believed to be central to the Demon Bear storyline that the film focuses on. At the end of the month, Dawson exited the film, and Alice Braga was cast as Reyes in her place.[6]

In early July 2017, ahead of the film’s spring 2018 release, the cast of New Mutants has arrived for filming in Boston. Stars Henry Zaga, Maisie Williams, and Charlie Heaton have been spotted in the Massachusetts capital with filming expected to start any day.[33] Principal photography began on July 10, in Boston, under the working title Growing Pains.[34][35]

On September 13, the official logo for the film, courtesy of director Josh Boone, released as a blood-splattered and bear-mauled image, teasing the horror elements that will be on display in The New Mutants.[36] Peter Deming served as cinematographer for the film, with shooting ending on September 16.[37] After filming wrapped on New Mutants, Fox chairman and CEO Stacey Snider compared the setting of the film to a "Breakfast Club detention/Cuckoo’s Nest institutional setting", and described the film as "a haunted-house movie with a bunch of hormonal teenagers. We haven’t seen it as a superhero movie whose genre is more like The Shining.[38]

On October 2017, Boone said that A Nightmare on Elm Street 3: Dream Warriors was also an influence on the film. He confirmed that it is set in modern day; clarified that Warlock was not in the film, but could appear in a sequel; and said that the Demon Bear would not be the main antagonist of the film, just that "it's very much inspired by that run on the comics."[39]

On January 11, 2018, The New Mutants was pushed back to February 22, 2019, 10 months from its original release date: April 13, 2018. Insiders say one reason for the change is for the studio to avoid having an overlap with X-Men movies in certain overseas marketplaces, where The New Mutants and Deadpool 2 would have been in theaters at the same time.[1]

In February 2018, it was reported that The New Mutants was undergoing reshoots to insert a new character before release [40].

On March 27, 2018, the film was pushed back yet again from its previously scheduled release date of February 22, 2019 to August 2, 2019. According to sources from Collider, Fox ordered reshoots to make The New Mutants scarier in tone, even going so far as to add a new character. While test screenings were reported to go well, and director Josh Boone was satisfied with his cut of the film, Fox felt that it was not "scary enough" and wanted The New Mutants to stand out tonally in a similar vein to Deadpool and Logan. As a result, it was reported that 50% of the film is undergoing reshoots, and one or two characters are being added in major roles than just cameos. Additionally, Josh Boone is said to be having creative differences with Fox over the reshoots. [41]

Josh Boone has stated that his original cut of the film would be released in theaters, as the planned reshoots never occurred. He also announced that a new trailer would be arriving on January 6, 2020.[42] 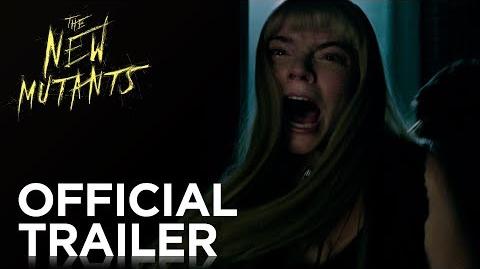 Retrieved from "https://xmenmovies.fandom.com/wiki/The_New_Mutants?oldid=101905"
Community content is available under CC-BY-SA unless otherwise noted.