May 13, 2019 was designated as X-Men Day by 20th Century Fox in preparation for the theatrical release of Dark Phoenix. X-Men Day is a "celebration of the culmination of the X-Men saga, its global fanbase, all the beloved characters, its groundbreaking impact on popular culture and enduring audience appeal for nearly 20 years." It also featured the debut of exclusive X-Men content, special events, advance ticket sales for Dark Phoenix and other surprises.[1] 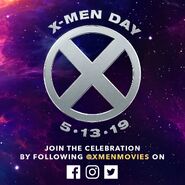 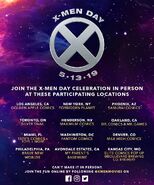 Retrieved from "https://xmenmovies.fandom.com/wiki/X-Men_Day?oldid=98604"
Community content is available under CC-BY-SA unless otherwise noted.