View source
watch 01:55
Cobra Kai Season 4 - The Loop
Do you like this video?
Play Sound

"You wanted the animal, Colonel. You got it."
―Wolverine to William Stryker[src]

X-Men Origins: Wolverine is the first film in the Wolverine trilogy and the fourth installment in the X-Men film series overall. Directed by Gavin Hood, it is a prequel set before the events of the first X-Men film focusing on the character of Wolverine and his time with Team X, before and shortly after his skeleton was bonded with the indestructible metal adamantium.

Shot in Australia and New Zealand, the film received an early release in Sydney, Australia on April 9, 2009 before being released worldwide on May 1, 2009.

This pulse-pounding action thriller sinks razor-sharp adamantium claws into the mysterious origins of Logan/Wolverine: his epically violent and romantic past, his complex relationship with Victor Creed/Sabretooth, and the ominous Weapon X program that unleashes his primal fury. Along the way, Wolverine also encounters legendary new mutants, including Deadpool and Gambit. You'll go "berserker" for this deeper, darker, more-spectacular-than-ever chapter of the X-Men saga![1]

﻿In 1845 in North-Western Territory, British North America, young James Howlett sees his father John Howlett killed by his friend Victor Creed's father, Thomas Logan. In an act of vengeance, James kills the elder Logan using bone claws which have grown out of his hands due to the stress of the incident. With his dying breath, Logan tells James that he is also his son. James runs out of the house, followed by Victor, who finds him and promises his younger brother that he'll look out for him. James and Victor run away, pursued by a torch-wielding mob.

In the years that follow, adult brothers James and Victor are seen fighting together in the American Civil War, World War I, World War II, and eventually the Vietnam War with their respective regenerative powers keeping them from being killed or aging. James is forced to act as a check on Victor's increasing rage and ferocity. In Vietnam, Victor kills a superior officer after being stopped from attempting to kill a girl, and James and Victor are sentenced to death by firing squad, though their unique regenerative abilities keep them alive.

Major William Stryker approaches the two mutants and offers them membership in a team he was putting together which would be Team X. The team consists of mutants Fred Dukes, possesses super strength and invulnerability; John Wraith, who can teleport; Chris Bradley, a.k.a. Bolt, who can control electricity; expert marksman Agent Zero; and mercenary Wade Wilson, an amazing swordsman who never stops talking. The brothers soon join the group.

During one mission, the team invades the headquarters of a diamond trafficking operation in Lagos, Nigeria, to retrieve a meteorite. Afterwards, Stryker and the team brutally interrogate people from a nearby village to learn where the meteorite was found. James is disgusted by the murders committed by his teammates and abandons the group.

Six years afterward, James—now going by his biological father's surname, Logan—is a lumberjack living with his girlfriend Kayla Silverfox. Meanwhile, Victor hunts down and murders Bradley, who works at a carnival; Victor mentions that Wade is already dead. Stryker locates Logan and claims that someone is killing members of the now-disbanded team. Stryker asks Logan for help, but is refused. Shortly after, Silverfox is murdered by Victor. Wolverine hunts down his half-brother, but is easily defeated. Stryker once again asks Logan for help, and Logan agrees. Stryker has Logan's skeletal system reinforced with adamantium, a virtually indestructible metal retrieved from the meteorite found by Team X. Before the procedure, Logan asks for his new dog tags to say "Wolverine," a reference to a story that Kayla told him. After the procedure, Stryker orders Wolverine's memory to be erased, but Wolverine overhears this and flees. Stryker orders Agent Zero to hunt him down and take his head off.

An elderly couple, Travis and Heather Hudson, see Wolverine—who escaped in the buff—enter their barn. They're wary but welcoming, giving him food and clothing, including a leather jacket of their son's—and their son's motorcycle. However, the next morning, Zero finds the house and shoots Travis and Heather dead, then turns his attention to Wolverine. Wolverine takes out several HMMWVs, a helicopter and Zero himself, telling Stryker over Zero's radio, that he'll hunt him down. Wolverine locates former associates John Wraith and Fred Dukes (who is now massively obese from a guilt-driven eating disorder), seeking to learn the location of Stryker's new laboratory. Wolverine learns the disbanded team had been capturing young mutants for Stryker. One of them, Remy LeBeau, also known as Gambit, escaped the island laboratory and knows its location. Dukes tells Logan that his brother Victor is actually working for Stryker, capturing and killing mutants for him. Meanwhile, Stryker captures a teenaged Scott Summers with Victor's aid.

Wolverine and Wraith locate Gambit in a New Orleans bar. Wolverine talks to Gambit while Wraith keeps watching outside, but Gambit suspects Wolverine was sent to recapture him and, using his ability to charge objects with kinetic energy, throws several playing cards at Wolverine that send him flying through a wall. Outside, Wolverine sees Victor has killed Wraith and taken a sample of his blood. Wolverine fights Victor, only to be interrupted by Gambit. Victor escapes, and after a brief struggle, Gambit agrees to take Wolverine to the mutant prison/laboratory on Three Mile Island. Once there, Wolverine confronts Stryker and learns Silverfox is still alive; Victor faked her death with hydrochlorothiazide. She was keeping track of the mutant to free her sister, Emma, who is also in the prison. Wolverine is devastated by this betrayal.

Now having no quarrel with Stryker, Wolverine departs. Victor, angered that Stryker let Wolverine go, demands the adamantium procedure. Stryker, however, tells him that he won't survive the procedure and in an act of rage, Victor tries to kill Silverfox. Wolverine hears Silverfox's screams and attacks Victor. Finally having the chance to kill Victor, Wolverine chooses not to give in to his animal instincts and instead knocks him out. Silverfox shows Wolverine to the holding cells, and he frees the mutants there; among them are Emma Frost, Scott Summers and Elizabeth Braddock.

Panicking, Stryker prematurely activates his newest creation, Weapon XI, a bald, pale-skinned and deformed Wade Wilson, lacking a mouth and with patterns on his skin marking his adamantium bone structure. As the rescue party approaches an exit, it is blocked by Weapon XI, who is under Stryker's control. Wolverine tells them to find a new exit as two blades extend from Weapon XI's arms. The blades are similar to Wolverine's claws, but more like katana swords, Wilson's weapon of choice. Wolverine realizes that this monstrosity is actually Wade Wilson. "Looks like Stryker finally found a way to shut you up," he quips.

Weapon XI, also called Deadpool, is a mutant Frankenstein's monster, with the abilities of several of the killed and captured mutants: Scott's optic blasts, Wraith's teleportation, and Wolverine's healing ability. During the escape, Silverfox is mortally wounded. The other mutants escape through the facility's tunnels, guided by Scott who is unable to tell them how he knows the way out. Emerging from the tunnel, the party encounters a helicopter. Riding in the helicopter is a familiar figure: Professor Charles Xavier, who has guided them to safety and offers them a home at his school.

Wolverine asks Gambit to ensure the prisoners are safe, while he returns to find Silverfox, who stayed behind because she was wounded. As he carries her to safety, Stryker shoots him in the back with an adamantium bullet. Wolverine tries to kill him but is shot in the head, knocking him unconscious.

Silverfox uses her powers of persuasion to order Stryker to walk away until his feet bleed, then dies from her injuries. Gambit returns to assure Wolverine that the mutants are safe, but due to amnesia caused by the brain damage the adamantium bullets inflicted, Wolverine does not remember anything (this was Stryker's intention, knowing that even the adamantium bullets could not kill Logan). Gambit tries to get Wolverine to come with him, but he declines. Gambit wishes Wolverine good luck before departing, and Wolverine flees the scene as the ambulances and police arrive.

The film has several additional scenes during and after the credits. The first of these scenes play a few seconds into the credits, and depicts William Stryker walking down a road. Due to Silverfox's order, the toes of his shoes are torn and bloody from walking for so long. A military vehicle drives up behind him and he is apprehended by military police for questioning about the death of General Munson. (Stryker murdered the general earlier in the film in order to protect his vendetta against mutants.)

Depending on which theater the movie was shown in, one of two possible endings then appears following the credits. In the first ending, Weapon XI's hand reaches out from the rubble of the nuclear complex to touch his severed head, which then opens its eyes and whispers, "Shhhh." The second alternate ending shows Logan drinking at a bar in Japan. The bartender asks if he is drinking to forget; Logan replies that he's drinking to remember. The former is the one included on home media devices, while the later is included as a separate deleted scene. 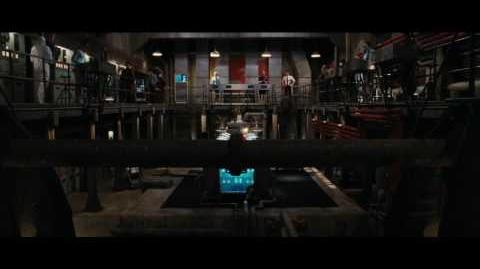 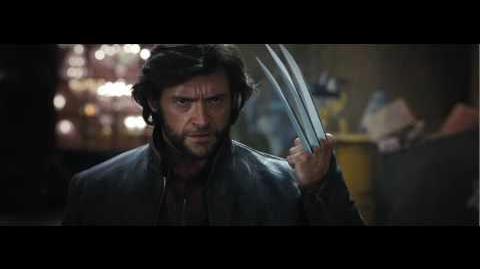