"Mutants. Since the discovery of their existence they have been regarded with fear, suspicion, often hatred. Across the planet, debate rages: are mutants the next link in the evolutionary chain, or simply a new species of humanity fighting for their share of the world? Either way it is a historical fact: sharing the world has never been humanity's defining attribute."
―Charles Xavier[src]

X2: X-Men United, also known as X2 and internationally as X-Men 2, is the sequel to X-Men and the second installment in the X-Men film series. The film was released worldwide on May 2, 2003.

﻿A powerful teleporting mutant, Nightcrawler, tries to assassinate President McKenna in the White House Oval Office, successfully defeating the President's Secret Service detail using his teleportation. He then vanishes at the last moment when a disabled guard is able to shoot him in the arm. The incident stirs up anti-mutant feelings around the country, supporting the Mutant Registration Act that eliminates peaceful coexistence.

Wolverine visits snowy Alkali Lake, hoping to learn about his origins, but finds nothing there except abandoned and decayed buildings near the dam.

Students from Xavier's School for Gifted Youngsters are visiting a museum. Jean Grey expresses fear of not controlling her powers to Cyclops. In the meantime, students Rogue, her boyfriend Iceman, and troubled Pyro get into a disagreement with some bullies in the museum. Professor X has to halt the conflict by freezing everyone in time, except his mutant students.

A retired military scientist, Colonel William Stryker, who hates and wants to destroy the entire mutant race, visits the President, mentioning how close the teleporter had gotten to the President. He gets approval for an attack on the school, which he has discovered by interrogating the imprisoned Magneto. Mystique, in the disguise of the late Senator Kelly tries to object, but fails. Later, Stryker visits Magneto in his Plastic Prison to question him again, using a chemical placed on the back of his neck. Stryker demands to know everything Magneto knows about Cerebro.

Wolverine returns to the school to get more answers about his past. Professor Xavier shows him the powerful Cerebro system which can connect him to everyone on the planet, mutants and humans alike. Wolverine wants the Professor to read his mind again for more information about his past, but Xavier explains that he can't tell Wolverine everything, that he will have to find out some things for himself.

Mystique disguises herself and breaks into Stryker's computers to learn more about his plans. Jean Grey and Storm find the fast-moving mutant assassin, Nightcrawler. It becomes evident that he was coerced; he has a scar similar to the one on the back of Magneto's neck, indicating that he's been influenced by Stryker himself.

Cyclops and Professor Xavier go to visit Magneto in the peculiar plastic prison they have created to nullify Magneto's powers. Magneto explains that Stryker has been questioning him, and points out that his son Jason Stryker was once a student at the school. To Professor Xavier's horror, Magneto confesses that he has told Stryker everything. At that moment, gas enters the prison chamber and both men pass out. Outside, Cyclops fights the prison guards but is defeated by Stryker's powerful assistant, Lady Deathstrike.

A handful of people are awake before the treacherous raid on the School for Gifted Youngsters. Wolverine and many of the students use their abilities to defend themselves. Most of the mutants escape, but six of the children are captured and taken away. Stryker turns up in person, finding Wolverine, briefly in shock, admitting that the Institute was the last place he'd expect to find him in. Confused, Wolverine asks who he was. but to Wolverine's frustration, Bobby erects an icewall to allow their escape. Stryker and his henchmen break into Cerebro to strip it for parts. Wolverine, Rogue, Bobby and Pyro escape in Cyclops' Car and head to Boston to meet Storm and Jean Grey. Wolverine reveals to the three teens that the man who invaded the mansion was Stryker, but he's unable to remember who he was or what he does. Bobby is from Boston, so the group stops at his house until they can contact Storm and Jean Grey.

Mystique meets Magneto's guard, Mitchell Laurio, in a bar and drugs him, then gives him an injection of a silver-colored fluid.

Professor Xavier awakes with Stryker and his assistant, Lady Deathstrike. Stryker explains that the metal brace on Xavier's head prevents him from using his psychic power. They argue about mutants and Stryker's son, a powerful mutant illusionist who did not stay at Xavier's school. At one point Deathstrike seems to look around her in a daze, and Stryker gives her another dose of the chemical he uses to control her on the back of her neck. Xavier realizes that Stryker caused the assassination attempt in order to manipulate the President. Stryker admits his chemical would not be strong enough to work on the Professor, so he brings in his mutant son Jason to influence Professor Xavier's mind.

Laurio brings Magneto his breakfast. Magneto notices "something different" about him—it seems Mystique has put iron into his blood, which Magneto pulls out with his powers, killing Laurio in the process. He forms the iron taken from the guard into small ball bearings which he uses to demolish his plastic prison and escape.

Bobby's family is surprised to learn that he's a mutant, so they ask him if he can stop being one. Bobby's disgruntled younger brother calls the police. When the police arrive, they order Logan to drop his blades; when he retracts them, he is shot in the head, the bullet stopped by his Adamantium skull. Pyro fights the police off with blasts of fire and seems intent on killing several officers when Rogue pacifies him by grabbing his ankle and extinguishing the flames with a blast of cold air she'd absorbed from Bobby.

Storm, Jean and Nightcrawler pick them up and they head for the school. Chased by F-16 fighter planes, Storm creates giant tornadoes; however, one of the fighters shoots two missiles at the X-Jet. Jean is able to disable one missile, but he other explodes very close to their jet. They take damage and Rogue is sucked out, only to be saved moments later by Nightcrawler. The plane is about to crash when Magneto repairs the hole in their ship and stops them just above the ground.

Magneto explains that Stryker invaded the school just to get to Cerebro. With it, he can make Professor Xavier focus on any group of people, such as mutants, and kill them. Magneto also reveals that Stryker is one of the only people who can manipulate adamantium, the metal on Wolverine's bones. Mystique has the plans for Stryker's base, but they need Jean to read Nightcrawler's mind to get the location: Alkali Lake. Wolverine didn't find it because it's underground. Mystique torments Wolverine by entering his tent disguised as Jean Grey. When they fly to the base the next day, Magneto taunts Rogue about the white streaks in her hair. He then complements Pyro's abilities.

Lyman asks Stryker why they are keeping the mutant children. He explains that he wants to be sure mutants are really dying when Cerebro operates.

Wolverine volunteers to enter the lab first, since Stryker will want him alive. Magneto disagrees. When Wolverine appears at the door, Stryker instructs the soldiers to admit him, but as soon as he sees him in person he knows it's not Wolverine. The imposter quickly changes into Mystique, who pacifies several guards and manages to get into the laboratory's heavily fortified control room.

Professor Xavier is in an elaborate illusion created by Jason, who accompanies him in the guise of a little girl. The two enter the Cerebro room, although in reality it's a grungy dome that Stryker has fabricated.

The rescue group splits up to find the children and the professor. Stryker goes to the dome and orders Jason to make the Professor kill all mutants he finds through Cerebro.

A manipulated Cyclops tries to stop Jean Grey, Magneto and Mystique, using the full power of his optic blast. Jean stays to get through to him while the others go on. The two duel among the dam's large machines, breaking the structural integrity of the dam and starting some leaks. Cyclops finally remembers himself and takes Jean with him.

Wolverine has gone on his own to search the laboratory for its secrets. He finds the room where the adamantium was applied to his bones, sees xrays on the walls, finds the liquid metal. Then, Wolverine remembers escaping the facility using his new metal claws after he overheard Stryker planning to erase his memory. Stryker finds him there. When Wolverine goes to attack Stryker, Deathstrike attacks him in a duel to the death. She stabs him repeatedly with her own adamantium claws. Wolverine also discovers that she has the same regenerative ability he does and the two battle to a near stalemate. Wolverine seems to gain an advantage when he stabs her with an adamantium nozzle and fills her body with it, leaving her unconscious form preserved by the adamantium in the water tank. Pyro leaves the plane, tired of waiting with Rogue and Bobby.

Magneto gets to the Cerebro room and dons his helmet just as the attack on mutants begins; the others fall to the floor screaming, their minds full of pain from the signal. He stops the attack, then reconfigures the dome as metal panels fly around to different places. Mystique enters in the guise of Stryker, and tells Jason to have Xavier kill all of the humans instead of the mutants.

Stryker leaves the complex, but Wolverine finds him and angrily punches him into submission and impales him with his claws. Wolverine demands answers, such as why he bonded him with the Adamantium and why erased his memories. Stryker only tells him that he'd volunteered for the procedure and that the two of them worked together. He says Wolverine is a failed experiment, that he was an animal before and an animal now. Wolverine chains him to the helicopter and goes back for the others.

The rescue group has reached the Cerebro chamber. Nightcrawler teleports Storm and himself inside. In order to get Jason to stop the illusion, Storm makes it cold in the room. Jason finally gives in, revealing Professor Xavier. As the ceiling panels start to collapse, Nightcrawler rescues Storm and then the Professor. The group runs away and finally finds the way outside.

In the meantime, Magneto and Mystique have found Stryker and commandeered his helicopter. Pyro has voluntarily joined them. However, Rogue flies the X-Jet over to the helicopter pad. As everyone struggles aboard, Wolverine notices Stryker chained to the dam—clearly the work of Magneto. Stryker demands to be let go, pleading with Wolverine and suggesting Wolverine will forever be an outcast like his friends. Wolverine decides to take his chances with his fellow mutants. As he walks away with a child named Artie Maddicks, the boy sticks his black, forked tongue out at Stryker.

The team discovers the plane is not fully functional and can't lift off, but the dam is bursting. Jean Grey leaves the plane, and prevents everyone from getting her back aboard. She holds off the flood waters while lifting the plane. She saves the group, and then is overwhelmed. The whole team is devastated at losing Jean, especially Wolverine and Scott.

At the White House, the President's televised speech is interrupted; everyone in the room freezes except the President... and the mutants. Professor Xavier presents him with information taken from Stryker's lab. The mutant message is simple: "We're here to stay." 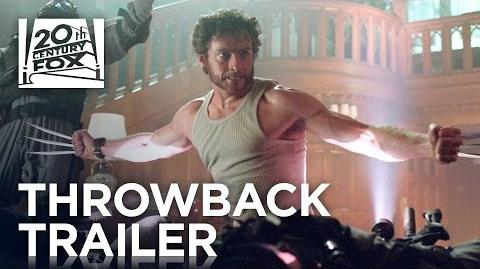 Retrieved from "https://xmenmovies.fandom.com/wiki/X2:_X-Men_United?oldid=107919"
Community content is available under CC-BY-SA unless otherwise noted.